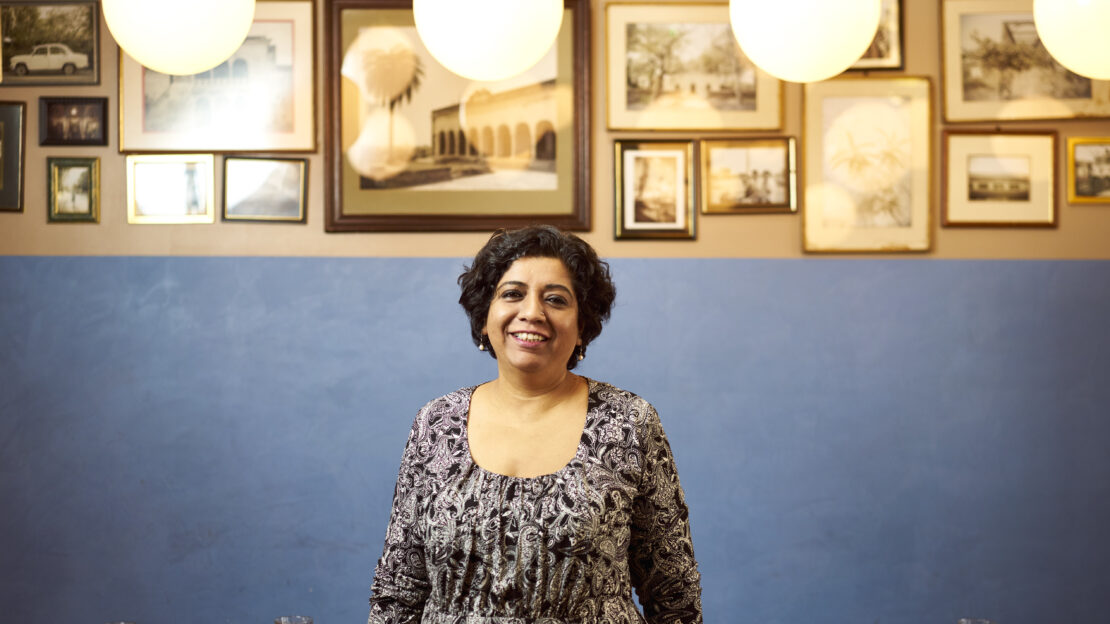 Over the last few months we’ve been introducing you to the people who make your food in our blog series, Shake the hand that feeds you. We believe that when consumers understand the hard-work and passion that goes into producing good, local food we’re more likely to value and use it well.

For our latest interview our Programme Co-ordinator Steph Wetherell was lucky enough to talk to Asma Khan from Darjeeling Express.

At the festival this year, Asma will be in conversation with Xanthe Clay about her Life in Food and teaching a cookery class based on her best-selling book. She will also be taking part in our panel on the rise of #MeToo in the kitchen on Saturday afternoon in The Dome.

You didn’t start cooking until later in life; what led you into the kitchen?

I moved to Cambridge in 1991; I had an arranged marriage and my husband was an academic teaching at the University. I didn’t know anyone and I come from a huge family, so had never been alone; you don’t eat alone, you don’t sleep alone, you’re never in silence. It was traumatic and a huge cultural shock for me.

I thought that if I started to cook, that time when I’m in the kitchen could take me home – the aromas, the tastes. When I went back to visit my family for the first time I told my mother how lonely I was, and my aunts, my whole family got together and taught me to cook. Because I used to spend so much time in the kitchen, although I had never actually learned to cook, I knew how to cook. So once I began, I quickly could cook everything.

When did you realise you wanted to start cooking for other people?

When I started cooking, I began to invite people to my house and started to make friends. Most of the women were South Asian and I saw the joy and that feeling in their eyes when they ate; the feeling that they had gone home eating that food. It gave me so much pleasure seeing this. That’s when I realised this is my calling – to feed and to serve.

We moved to London in 1996, and it wasn’t until 2012 when I finished my PhD that I did my first supper club – the dream stayed in me all those years. It was my own secret dream.

Why did you make the transition from supper clubs to running your Darjeeling Express pop up?

I didn’t tell my husband I was doing the supper clubs as I knew he wouldn’t approve; he travelled a lot and so every time he went away I did a supper club. My kids hated it though, and so I knew I had to stop. I wasn’t willing to give up on cooking however, and a friend sent me to speak to the manager of a very trendy pub in Soho. I was so desperate to cook I took the offer of a temporary pop up – at that time pop ups were very unusual, there was no one doing it. It was tough in the beginning – I’d never worked in a professional restaurant before, and I struggled at first, but I made it; the manager really stood by me and believed in me.

Then Fay Maschler came and wrote an amazing review in the Evening Standard – a glowing review of my food – and everything changed. The queues were huge! At that point I knew we’d made it and the whole story changed.

You have an entirely female kitchen in your restaurant – how did that come about?

I met most of them when I started the supper clubs– they were nannies and cleaners in the local hospital and school. I asked them if they ate Indian food and they said no as it smells a lot when cooking because the spices. So, I invited them to my house and I fed them. Then they started coming early and having breakfast, and a relationship of trust and love built up. In India, someone of my background, a Muslim from a royal family, would not have sat and eaten with these women – there’s a big class divide. But in my kitchen, we were all citizens of London. Food can be a great leveller and great elevator and that happened in my kitchen.

For me and for these women, cooking filled a hole of loneliness. They worked with me when I did the pop up and moved with me when I opened the restaurant in 2017. The average age of the women cooking in my kitchen is 50 – in the autumn of their lives, this is their spring.

What is different about running a female only kitchen?

It’s a huge difference, especially for Indian food. Almost all the men who are cooking in India, Pakistan, Bangladesh, London, learnt to cook in culinary school. In our culture the boy isn’t allowed into the kitchen whereas the girls were in the kitchen helping. We all grew up cooking with other women and even though these women didn’t know my style of cooking, they just understood.

In my kitchen, everything is estimated; nothing is measured or timed. I need to pick up spices in my hand – if you tell me a teaspoon of something I don’t know what it is. We use very little equipment or gadgets as we didn’t grow up using it. None of us know how to use big chef knives and we’re all terrified of them, but my women can butcher an entire lamb, fillet a fish, all with small knives. They knead dough by hand, and if the women are making parathas, they take the pieces in their hand and each is identical – they don’t need to weigh it because they’ve done it so many times. In the end, it is about how much love you put into how you cook; that’s more important than gizmos and technology.

You’ve spoken publically about the harassment that women receive in many kitchens – what do you think needs to change?

The narrative is that the kitchen is a place that is pressurized, hot, cramped and people lose their temper. But other people working under pressure don’t bully or violate the people they work with, so how is this even being allowed?

The onus lies with the owners of restaurants. They do not set up systems that will have disciplinary action against chefs – there is no confidence that if a woman goes to a higher authority that they won’t just take the side of the chef. They think the chef is the future of the restaurant and they want to protect their investment. Shame on them. This is where the problem starts. You are expendable. And sadly, many women never come back to the kitchen after a bad experience.

What has the success of Darjeeling Express and being featured on Chef’s Table meant to you?

I don’t see this as my personal success; I am the face of a movement, a revolution. I see this a success for women – I want people to look at us and think I can do this too. My real victory will be when there will be a lot of places like Darjeeling Express and there will be space for all women in the kitchen. This is where it starts, where women take ownership of spaces and kitchens; an explosion of women succeeding in hospitality. Women standing by women; this is how we all win.

I don’t just want to shatter the glass ceiling – I want to bring the entire edifice down.