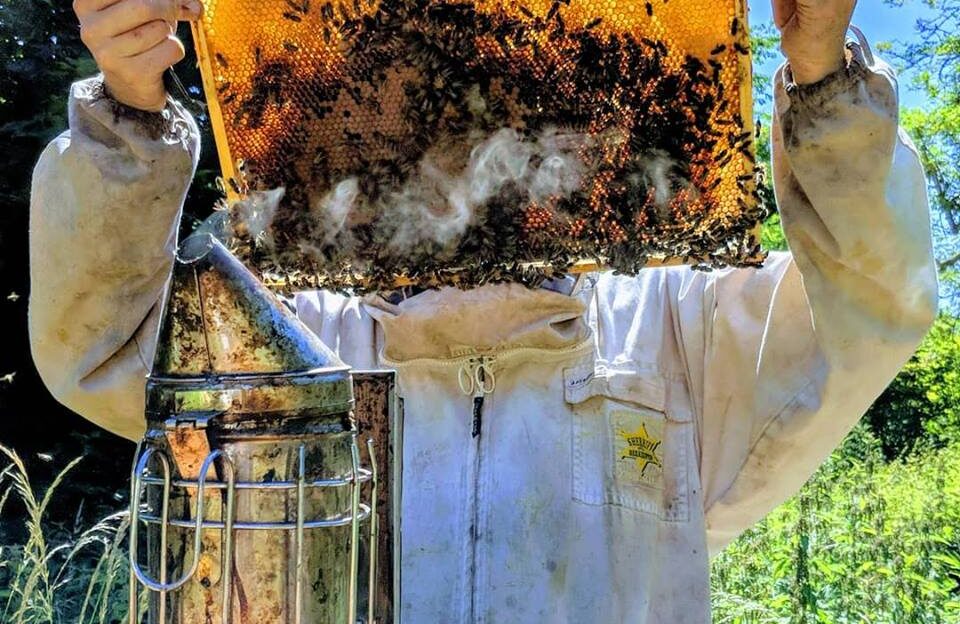 Here at festival HQ we’re committed to introducing you to the people who make your food. We believe that when consumers understand the hard-work and passion that goes into producing good, local food we’re more likely to value and use it well.

With that in mind here is the second in our 2019 blog series “Shake the hand that feeds you” a collection of interviews with the best food producers, chefs, writers and farmers from across Wales, so you can start to get excited for #AFF2019.

For this interview, our Programme Co Ordinator Steph Wetherell has been talking to Kit Newell from Wye Valley Meadery who will be having a stall at the festival this year and hosting a mead tasting on our demo stage in the Cheese & Wine Market at 11.00-11.45 on Saturday 21st September.

If you say the word mead, most people think of Vikings and monks. It’s the world’s oldest alcoholic drink originating from the fact that if you put honey and water together in the right way, it will ferment with natural yeast. When neolithic man gathered honey, to prevent the bees from taking it back, they used to store it under-water as honey naturally sinks. From there, the first primitive mead was probably created, and Man discovered the first hangover soon afterwards! It’s quite a simple process to make it– the only ingredients are honey, water and yeast, and from these building blocks, you can make it as easy or complicated as you want.

So, how did you get into bringing mead back, and making it yourselves?

My brother, Matt, is a beekeeper – he’s been keeping bees for 15 years and usually had lots of honey to experiment with. We were wondering what we could do with it, rather than just selling it as honey. We were also keen homebrewers, and became frustrated that in commercially available honey beers, the honey flavour was often lacking. So we decided to brew a honey beer, and kept increasing the amount of honey and using less malted barley in until we realised were fermenting on pure honey. So much like primitive man, we discovered we were making a mead!

From starting as a hobby 4 years ago, we have been experimenting and trying out different flavours ever since, settling on a few core favourites and incorporating the occasional, limited release, off-the-wall batches for our die-hard fans. Coffee and Vanilla, Spruce Tip and Green Tea, and Birch Sap and Heather honey. It’s been a thrill to get creative.

What makes your mead different?

People who’ve had mead before will think of it like heavy dessert wine or cough syrup, but we’re trying to make a modern version. Our mead is light and refreshing – something you can have in the place of cider or beer. It’s also bottle conditioned, meaning it’s sparkling which is quite unusual for a mead. We also infuse it with other flavours like hops, elderflower and rhubarb. It can be enjoyed with ice, as a mixer with spirits or even hot and spiced in the winter!

When did you start selling your mead?

We started selling in October 2018, so we’re still quite new as a commercial company. It’s a family business – just me and my brother with some willing and cherished volunteers called in for bottling, labelling, and most importantly, tasting. Being so small, we can be flexible and if we get a request for something that we like the sound of, we make it. As with any small start-up, we work hard but it is a lot of fun.

We’re grateful to be supported by the fantastic small retail outlets this area is famous for. Local shops have been very supportive, places like the Forest Deli in Coleford stocked our mead from day one and have been really encouraging. It is so important for local companies to band together, forming a relationship between producers, stockists and customers. We love chatting to those who drink our mead and feel like the closer we can be to those who buy it, the better our product will be.

What do you like about being a small producer?

We love the freedom to experiment, and the agility at which you can react to trends – if we notice there’s a particular hop variety that’s really popular, we can get a label made and do some experiments and have a trial batch out within around a month if we really put our minds to it. We also get a lot of enjoyment about doing something real and tangible, seeing a product through from inception to the point where a customer purchases it is a very rewarding feeling. We think we have made something good and every time someone buys it, we are gratified to see that people agree!

What is so special about the Wye Valley?

It’s the UK’s original tourist destination – William Wordsworth and his poems saw to that – it’s a stunningly beautiful area. The variety of the local trees, particularly the Small Leaf Lime, give the honey a really unique flavour, and the chemistry from the underlying carboniferous limestone gives the water we use a real taste of the area. The wine drinkers often refer to this mysterious concept of “terroir” but we can see how the local area really influences the flavour of what we create.

We grew up here and spent our childhood walking, canoeing, and cycling up and down the steep valleys that make up the area. We knew we had to make our product a reflection of all that we enjoy about the landscape. When we see our product being taken all over the country and beyond, it’s good to think that a taste of the Wye Valley can be taken anywhere and enjoyed.