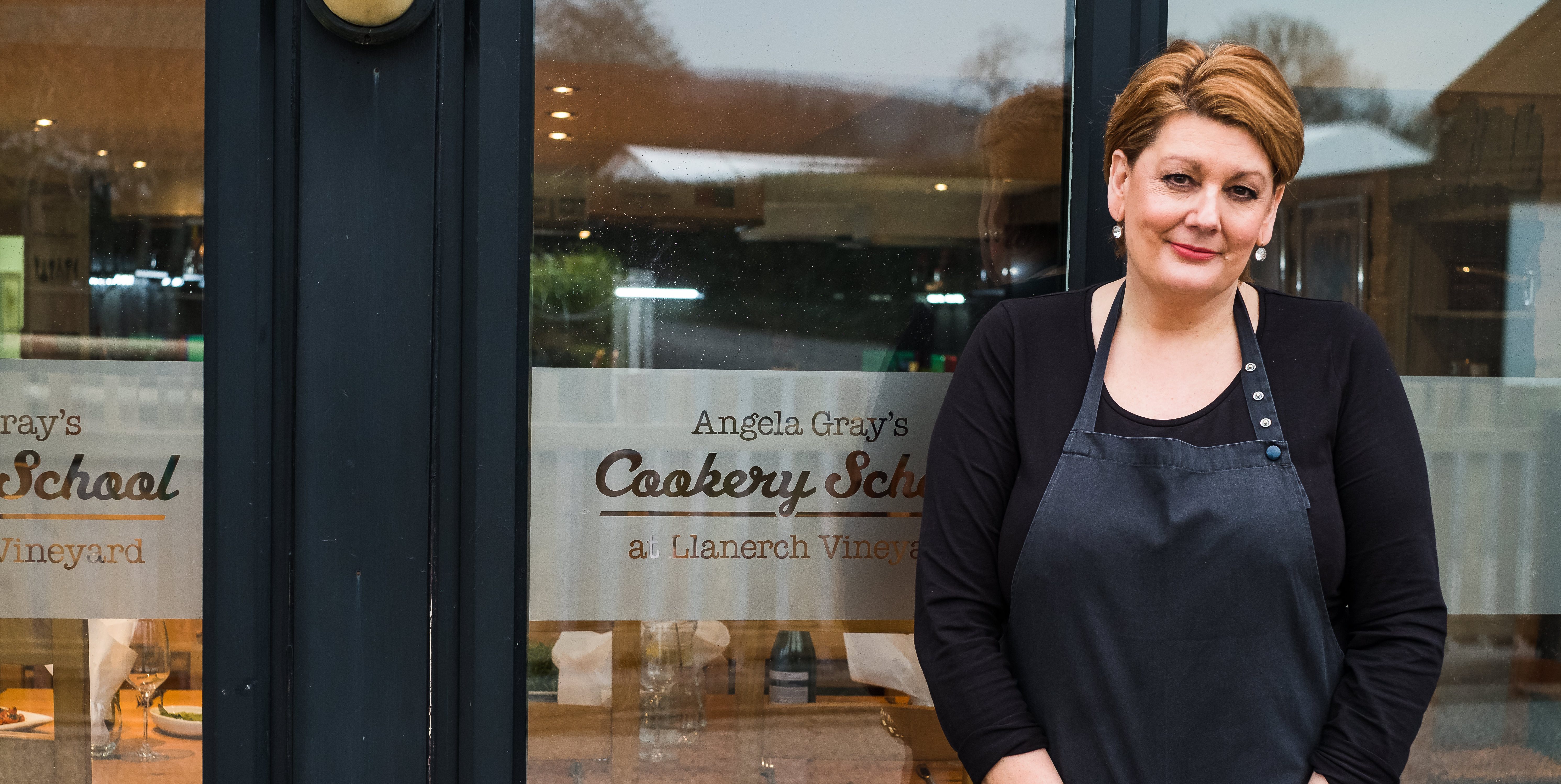 Cook, teacher and broadcaster, Angela Gray is stepping down as host of the Festival’s Masterclasses, a role she handled with aplomb since 2001. She retires as the longest-serving member of the current Festival team. Quite how she arrived is now shrouded in mystery. I think she came as a present from the Welsh Development Agency. And, back then, how we needed her.

We certainly never had a Masterclass before Angela so it’s fair to say that she must have invented the concept. The first ones were held in the Corn Exchange above the Market Hall and had an unapologetically Welsh theme. Demonstrators included Jonathan Carthew of Black Mountain Smokery and local butchers Chris Wilkins and Paul Bishop.

From there they gravitated to the Angel Hotel Ballroom and then on to their current home at The Priory Centre, gathering more and more famous chefs on their way. Angela’s charm and professionalism meant that nobody left disappointed and ensured a steady stream of new and returning chefs, helping to build Abergavenny’s reputation as the ‘Glastonbury of Food Festivals’.

So, what is a Masterclass? It’s like a cookery demonstration, only better. Because it’s intimate; because you are served delicious nibbles prepared by Angela and her team, and almost certainly a glass of wine; and because when you leave you get to take away recipes carefully put together by Angela so that you can repeat what you have watched at home.

If that sounds relatively straightforward, it’s because you haven’t taken into account the loose cannon: the chef. Of course, some chefs are marvellous. Perfectly prepared. They respond in good time to Angela’s requests for recipes and ingredients, and they even pop in to check that everything’s in hand ahead of their demo.

But it’s not always like that. Chefs are notoriously busy people and sometimes thinking about what they are going to cook for a demonstration is not their most pressing concern. All that Angela might have been able to glean ahead of the festival weekend is that they plan to cook something ‘ seasonal and local’;  or that they will be inspired by ‘what’s in the market at the Festival’. The local branch of Waitrose has often been the beneficiary of that approach.

Then there is the demon drink. After all a festival is a festival, and an afternoon demo may follow a morning with friends in the Angel Bar and a long lunch at the Walnut Tree. On one such occasion an irate email reached the office on Monday morning demanding money back. ‘I believe that the presenters were drunk,’ it thundered. Oh dear. How many more of these would arrive? Checking back with Angela was reassuring. ‘Yes, they were a little tipsy but they were very funny. The audience loved it.’

And of course, most difficult of all, can be the problem of generosity; Franco Taruschio’s speciality. He would insist that the food he demonstrated should also all be served to the audience. With little more than a couple of hobs and a bottle fridge to work with, Angela and Franco would roll their sleeves up and eighty lucky people would be the beneficiaries of a totally unexpected three course meal.

At the end of a Festival, Angela would invariably declare herself to be ‘on her knees’. But her presenters had always been ‘lovely’ and her team, ‘fantastic’. You just had to believe that she actually enjoyed it.

Angela’s genius was that she would take whatever came at her with the same unflustered cheerfulness. If Mark Hix decided on Saturday morning that he needed a couple of kilos of ceps for his demo, she would find them. If Mitch Tonks announced his intention to bake a whole sewyn in sea-salt, thank heavens for Halen Mon.

The rule of thumb was that the better the presenter knew the Festival, the less likely he or she would be to prepare in advance. They knew they could count on Angela. And Angela, of course, knew pretty well who was going to come unprepared.

Angela has been there herself, many times. She has presented two prime-time TV series, ‘Hot Stuff’ and ‘More Hot Stuff’.As an Ambassador for Welsh food, she has demonstrated on stages all over the UK and abroad. And more recently, as host of her own highly acclaimed Cookery School at Llanerch Vineyard, where she welcomes guest chefs into her kitchen on a regular basis

So farewell then Angela. You will be sorely missed. But hey, maybe this means that you will now be free to do your own cookery demonstration. We have a slot we would love you to fill. It’s on the third weekend in September. Nearer the time, somebody will be in touch to find out what you need. Please try and be co-operative…