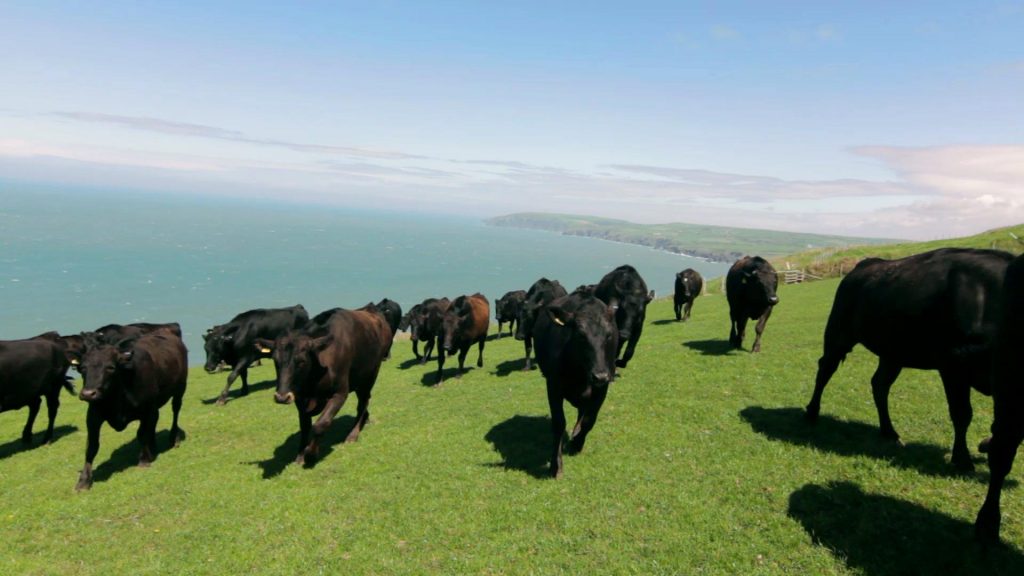 There’s change in the air – more people are engaging with the food they’re eating and thinking about where they’re buying it from. Words like heritage and rare breed are finding their way into our food vocabulary, and new faces are popping up in the farming scene with innovative ideas. But why is it important to understand more about the farming practices behind our food?

Abergavenny Food Festival was started in 1999 by two farmers, as a response to the BSE crisis. Topical and important farming issues have remained at the heart of the festival over the last 20 years, and a central part of the festival every year is our Farmyard area, located in Castle Street carpark. From hands-on activities to engaging debates, this is a great place to learn more about the realities of farming, discuss some of the current issues in the food system, and meet some of the local farmers and their animals.

“Farming is a global issue. Get it right and it has the capacity to stabilise climate systems, store carbon and preserve biodiversity,” local farmer Huw Evans from Three Pools Farm explains. “But it’s currently not achieving what it could. If we can farm better, we’ll improve the nutrition and the flavor of the food we produce, as well as seeing improvements in health and wellbeing.”

While the way we farm has a huge impact on the quality, flavour and nutrition of the food we eat, it also impacts the soil, biodiversity and wider ecology of the land. We’re seeing a huge drop in the diversity of food that we’re eating, illustrated by 98% of vegetable varieties disappearing over the last century, meaning a loss in the taste that many of these varieties bring, but also a lack of resilience and genetic diversity in the plants themselves. There’s also been a dramatic drop in pollinator numbers and a crisis in our top soil, demonstrating that something needs to change. However, there are farmers who are creating change in our fields, growing and producing food in a way that is in harmony with nature, regenerating the land and building soil.

Every year we host two big debates in the Farmyard area to help you dig deeper into some of the biggest challenges that we’re facing in farming. This year Saturday will see our CEO Aine Morris chairing a discussion around how we can invest in the next generation of farmers, and Sunday sees experts such as Patrick Holden and Rob Yorke exploring what food in Wales might look like after Brexit. But it’s not just about the big debates; here at Abergavenny Food Festival, we’re passionate about supporting these farmers and showcasing the exciting work they are doing in all aspects of the festival, so here are some of the places that you can hear them talk, attend tastings and buy produce from some of the most exciting producers at this year’s festival.

Ever wondered where your flour is milled, or where the grain that goes into it is grown? Talgarth Mill, a watermill located just around the corner at the foothills of the Black Mountains take locally grown British wheat, alongside other ancient and heritage grains such as spelt and rye, and grind it into wholemeal stoneground flour ready for your kitchen. Come and learn about the whole process of making bread, from farm to table, at their talk on our Farmyard stage, and don’t forget to take a look at the ‘Field of Wheat’ we will have on display.

We have historically had a huge number of breeds of livestock across the UK, reflecting the different landscapes, weather and needs of regions, but with the rise of industrial farming, much of this diversity has been lost. However, many small-scale farmers are reviving these breeds, championing the importance of their genetic diversity, but also highlighting the superior flavour of the meat they produce. Join local pig farmer Martha Roberts as she leads a tasting on nose-to-tail pig eating, Everything But The Oink, and as she talks about the reality of being a pig farmer on the Farmyard Stage.

With the average age of a UK farmer now over 60, we are facing a crisis in the future of farming. But a new generation of people are taking to the fields, getting their hands in the dirt and choosing a career in farming. But how can we grow and invest in this next generation of farmers? What can we do to remove some of the barriers and make it easier for people to get into farming as a career? We’ll be exploring these questions and more with some of the most exciting new farmers and farming organisations as they debate this on our Farmyard stage.

Most of the lentils, beans and peas we consume in this country are grown abroad and imported. Yet we have a strong history of growing a range of beans and peas in the UK, and they form an important part of our crop rotation, so why don’t we eat more of our home-grown produce? That’s what Hodmedods have set out to do, and you can now find a range of British grown pulses, grains, flours and seeds on sale, including in our festival market.

The Future of Food

Thinking about our farming systems doesn’t just involve considering our immediate future and the food we produce this year or next. We also need to be thinking further into the future – to 2029 and beyond – and planning how we can feed a growing population in a way that produces healthy and nutritious food but also looks after the planet. Will our diet come from embracing high-tech farming production methods in urban centres, or see us returning to localised food system and grass fed livestock? This exciting debate in the Borough Theatre will see two opposing views being explored and discussed as we explore how the future of our farming might look.

Meat, but not as we know it

Most of the red meat we eat comes from cows between two and three years old and sheep under a year in age. Our preconception is that older animals will be less palatable or tough. But there’s a growing movement of farmers who are setting out to change our mind and produce high quality meat from these livestock. From retired dairy cows to ewes who are no longer suitable for lambing, eating this meat can help support sustainable farming systems as well as tasting delicious. To learn more, come along to our Pasture-fed Mutton masterclass, or the Anatomy of a Cow tasting workshop.

Keen to learn more? You can see the full Farmyard programme here for a full weekend of farm focused talks, interactive activities and stalls.