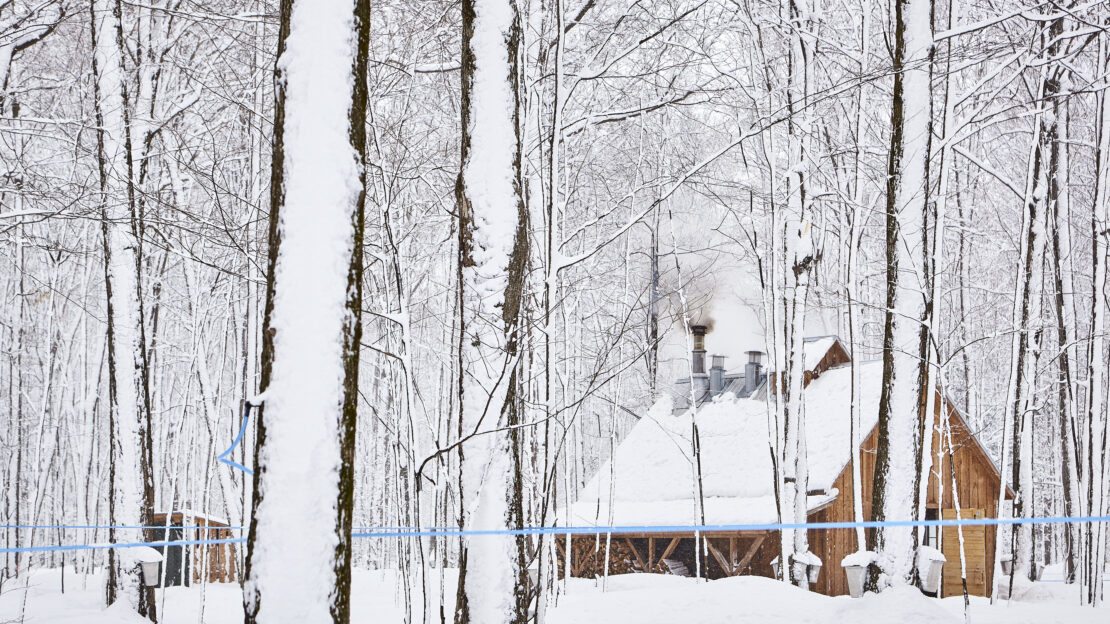 Ask someone to name a great pairing for Canadian maple syrup, and there’s a good chance the answer will include “pancakes.” But, did you know that deep in the forests of Québec, a food production system works in perfect harmony with nature to produce something with a lot more uses.

This year the grand finale to our Cooking Over Fire demonstrations will be a Maple BBQ showcase with Hang Fire, James Golding, Georgina Hayden and Manon Lagrève.

Ahead of that, with some help from Maple from Canada, we wanted to let you know all about the (perhaps surprising) sustainability credentials and provenance of the syrup they call ‘Canadian Liquid Gold’.

Read on to find out more.

The Canadian province of Québec is the powerhouse of global maple syrup production, accounting for 72% of all the maple syrup on the planet. The food product is such an important part of Canadian culture, heritage and everyday life that a maple leaf takes centre stage on the national flag.

And there’s even more reason to celebrate the magic of maple this year with a late spring and cold temperatures leading to a record harvest of 159 million pounds. It’s an impressive statistic in its own right, but it’s even more remarkable when you consider the bumper production was achieved, as it always is, without incurring environmental damage. That’s because there is no such thing in Québec as “over-farming” when it comes to maple. Everything is left to Mother Nature, who regulates annual production according to her whims.

To understand maple’s green credentials, it’s important to understand how it is produced, which, like the best things in food, is beautifully simple. There’s only one ingredient – the sap from maple trees.

The sap is tapped from the trees and taken to a sugar house where it is boiled. The heating process causes water to evaporate and the sap becomes denser and sweeter. The boil continues until the liquid reaches the density and viscosity of maple syrup. And that’s just it, with nothing added or taken away.

It takes a lot of tree sap to make the sticky stuff we know and love as maple syrup. In fact, about 40 litres of sap are required to make a single litre of pure maple syrup, which explains why good quality maple syrup, like special olive oils, is a premium product.

After evaporation, the newly-born syrup is subjected to stringent quality control, undergoing a thorough process of inspection and grading before it is bottled or canned and sent out for distribution.

A rolling policy of forest conservation and renewal ensures the maple trees remain healthy as well as productive. The tapping, in which the sap is removed, takes place in slightly different areas each season to maintain the integrity of the trees. It helps that there are a lot of them – an estimated 34 million. In a further move, the Quebec Preservation of Agricultural Land and Agricultural Activities Act bans the chopping down of an entire maple grove in an agricultural zone.

Canadians’ attitude towards nature conservation, the reverence for maple syrup and legislative intervention means the production of maple is part of a mutually beneficial relationship between producers and the natural world. The process also helps to reverse some of the environmental damage that takes place elsewhere. So maple trees in Québec capture the carbon produced by the equivalent of 290,000 cars in a year. That represents 9% of all cars in the province.

The sustainability of Canadian maple syrup, as well as its outstanding taste and culinary versatility, is helping to attract a new generation of converts. UK imports hit a record $7.2 million (Canadian dollars) for the first quarter of 2019.

A total of 1.76 million pounds (lb) of maple were shipped here, including imports through Newport, between January and April – outstripping the figure for the same period last year by 259,314 lb.

Now that’s enough maple syrup to make a lot of pancakes, and cupcakes, and BBQ marinades, and dressings, and savoury pies…

Head to our Cooking Over Fire stage on Sunday 22nd September to see how to use it for yourself (or add to your pancakes and bacon this weekend).